The oldest of five children, Everett Clow was born in Barrett, Minnesota, and graduated from the West Central School of Agriculture at Morris with top honors, later training in tool-making at Dunwoody Institute in Minneapolis, Minnesota. He worked as a tool-and-die maker at Federal Stamping before deciding at age 42, with his wife Gladyce, to start their own metal fabrication business. Together, they purchased a small manufacturing shop that employed 8 people, renamed it, and moved it from Bloomington to St. Louis Park, Minnesota. At that time, its first customers were all metro based. After hiring its first manufactures representative organization in 1971, sales expanded nationwide. The customer base included customers in the computer, copier, agriculture and snowmobile industries.

In June of 1973 the company purchased the site of its current operations, a 15,750 square foot facility in Merrifield, Minnesota, as an expansion site. In 1980 the company moved the remainder of its St. Louis Park operations to Monticello, Minnesota. In 1985, all production was consolidated to the Merrifield location, leaving the Monticello location to focus on assembly, final inspections, and packaging until 2006 when all operations were combined under one roof at the Merrifield, Minnesota location.

Gladyce and Everett’s three children Ric, Reggie, and Tara (Lynne) grew up in the family business with both sons active in the daily operations with Ric ultimately leading and managing the Monticello location while Reggie led the Merrifield facility.

Through the years the company has experienced substantial growth because of exceptional value, quality, on-time delivery, and exceptional customer service. Today the Merrifield, Minnesota, facility is over 285,000 square feet, and employs more than 500 full time employees. Clow Stamping provides world class metal stampings to several fortune 500 companies. Top industries serviced include agriculture, recreational vehicles, lawn and garden equipment, lighting, exercise equipment as well as parts for refrigeration and the oil and gas industries. Today the company remains a family organization and is still owned and led by second generation Reggie Clow and his son third generation Gabe Clow. The family leadership has grown operations from an eight-person shop to one of the largest short to medium run metal stampers in the Midwest! 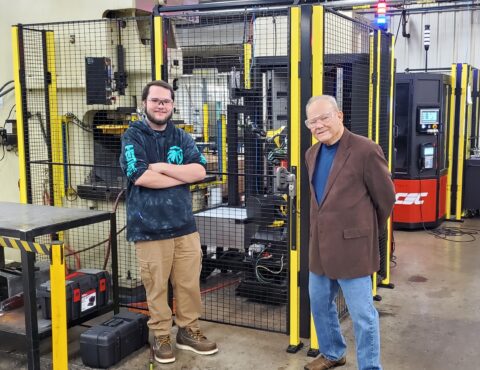 We look forward to quoting your future requirements and thank you for allowing Clow Stamping Company to serve your needs.

Find Your Sales RepRequest a Quote